Skyscraper
Askyscraper is a tall, continuously habitable building. There is no officialdefinition nor height above which a building may clearly be classified as askyscraper. Most cities define the term empirically; even a building of 80 meters may beconsidered a skyscraper if it protrudes above its built environment and changesthe overall skyline.

Definition
The word"skyscraper" originally was a nautical term referring to a tall mastor its main sail on a sailing ship. The term was first applied to buildings inthe late 19th century as a result of public amazement at the tall buildingsbeing built in Chicago and New York City. The traditional definition ofa skyscraper began with the "first skyscraper", a steel-framedten-storey building. Chicago's now demolishedten-storey steel-framed HomeInsurance Building(1885) is generally accepted as the "first skyscraper". Thestructural definition of the word skyscraper was refined later by architecturalhistorians, based on engineering developments of the 1880s that had enabledconstruction of tall multi-storey buildings. This definition was based on thesteel skeleton—-as opposed to constructions of load-bearing masonry, whichpassed their practical limit in 1891 with Chicago'sMonadnock Building. Philadelphia's City Hall, completed in 1901,still holds claim as the world's tallest load-bearing masonry structure at 167 m. The steel framedeveloped in stages of increasing self-sufficiency, with several buildings in Chicago and NewYork advancing the technology that allowed the steelframe to carry a building on its own. Today, however, many of the tallestskyscrapers are built almost entirely with reinforced concrete. Pumps andstorage tanks maintain water pressure at the top of skyscrapers. 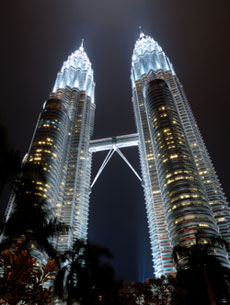 A looseconvention in the United States and Europe now draws the lower limit of askyscraper at 150 meters.A skyscraper taller than 300meters may be referred to as supertall. Shorter buildingsare still sometimes referred to as skyscrapers if they appear to dominate theirsurroundings.
Thesomewhat arbitrary term skyscraper should not be confused with the slightlyless arbitrary term highrise, defined by the Emporis Standards Committee as"...a multi-storey structure with at least 12 floors or 35 meters in height."Some structural engineers define a highrise as any vertical construction forwhich wind is a more significant load factor than earthquake or weight. Notethat this criterion fits not only high rises but some other tall structures,such as towers.
The wordskyscraper often carries a connotation of pride and achievement. Theskyscraper, in name and social function, is a modern expression of the age-oldsymbol of the world center or axis mundi: a pillar that connects earth toheaven and the four compass directions to one another.
Before the19th century The GreatPyramid of Giza, circa 2560 BC, was 146 metres tall and its height was unsurpasseduntil at least the 14th century AD.
The Two Towersof Bologna inthe 12th century reached 97.2metres in height.
The16th-century city of Shibamconsisted entirely of over 500 high-rise tower houses.

History
Modernskyscrapers are built with materials such as steel, glass, reinforced concreteand granite, and routinely utilize mechanical equipment such as water pumps andelevators. Until the 19th century, buildings of over six stories were rare, ashaving great numbers of stairs to climb was impractical for inhabitants, andwater pressure was usually insufficient to supply running water above 50 m.
The tallestbuilding in ancient times was the Great Pyramid of Giza in ancient Egypt, whichwas 146 metrestall and was built in the 26th century BC. Its height was not surpassed forthousands of years, possibly until the 14th century AD with the construction ofthe Lincoln Cathedral (though its height is disputed), which in turn was notsurpassed in height until the Washington Monument in 1884. However, beinguninhabited buildings, none of these buildings actually complies with thedefinition of a skyscraper.
High-riseapartment buildings already flourished in antiquity: ancient Roman insulae inRome and other imperial cities reached up to 10 and more stories, some withmore than 200 stairs. Several emperors, beginning with Augustus (r. 30 BC-14AD), attempted to establish limits of 20-25 m for multi-storey buildings, but met withonly limited success. The lower floors were typically occupied by eithershops or wealthy families, while the upper stories were rented out to the lowerclasses. Surviving Oxyrhynchus Papyri indicate that seven-storey buildingseven existed in provincial towns, such as in 3rd century AD Hermopolis in RomanEgypt.
Theskylines of many important medieval cities had large numbers of high-rise urbantowers. Wealthy families built these towers for defensive purposes and asstatus symbols. The residential Towers of Bologna in the 12th century, forexample, numbered between 80 to 100 at a time, the largest of which (known asthe "Two Towers") rise to 97.2 metres. In Florence, a lawof 1251 decreed that all urban buildings should be reduced to a height of lessthan 26 m,the regulation immediately put into effect. Even medium-sized towns at thetime such as San Gimignano are known to have featured 72 towers up to 51 m height.
Themedieval Egyptian city of Fustathoused many high-rise residential buildings, which Al-Muqaddasi in the 10thcentury described as resembling minarets. Nasir Khusraw in the early 11thcentury described some of them rising up to 14 stories, with roof gardens onthe top floor complete with ox-drawn water wheels for irrigating them.Cairo in the 16th century had high-rise apartment buildings where the two lowerfloors were for commercial and storage purposes and the multiple stories abovethem were rented out to tenants. An early example of a city consistingentirely of high-rise housing is the 16th-century city of Shibam in Yemen.Shibam was made up of over 500 tower houses, each one rising 5 to 11storeys high, with each floor being an apartment occupied by a singlefamily. The city was built in this way in order to protect it from Bedouinattacks. Shibam still has the tallest mudbrick buildings in the world, withmany of them over 100 feethigh, and the tallest of them (a minaret) standing at over 175 feet (53 m).
An earlymodern example of high-rise housing was in 17th-century Edinburgh, Scotland,where a defensive city wall defined the boundaries of the city. Due to therestricted land area available for development, the houses increased in heightinstead. Buildings of 11 stories were common, and there are records ofbuildings as high as 14 stories. Many of the stone-built structures can stillbe seen today in the old town of Edinburgh.The oldest iron framed building in the world is The Flaxmill (also locallyknown as the "Maltings"), in Shrewsbury,England. Builtin 1797, it is seen as the "grandfather of skyscrapers” due to itsfireproof combination of cast iron columns and cast iron beams developed intothe modern steel frame that made modern skyscrapers possible. Unfortunately, itlies derelict and needs much investment to keep it standing. On 31 March 2005,it was announced that English Heritage would buy the Flaxmill so that it couldbe redeveloped.

Today
Today,skyscrapers are an increasingly common sight where land is scarce, as in thecentres of big cities, because they provide such a high ratio of rentable floorspace per unit area of land. But they are built not just for economy of space.Like temples and palaces of the past, skyscrapers are considered symbols of acity's economic power. Not only do they define the skyline, they help to definethe city's identity.