More than aquarter of all people in the world belong to Eastern religions, which includeBuddhism, Hinduism, Sikhism, and Taoism. These people worship in temples, whichare architecturally as diverse as the religions are different from each other.From the ancient ruins of Ankor Wat to the distinctly modern Wat Rong Khun,there are hundreds if not thousands of amazing temples in the world. 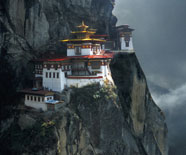 Tiger’sNest Monastery, perched precariously on the edge of a 3,000-feet-high cliff in Paro Valley,is one of the holiest places in Bhutan.Legend has it that Guru Rinpoche [wiki], the second Buddha, flew onto the cliffon the back of a tigress, and then meditated in a cave which now exists withinthe monastery walls.

Themonastery, formally called Taktshang Goemba, was built in 1692 andreconstructed in 1998 after a fire. Now, the monastery is restricted topracticing Buddhists on religious retreats and is off-limits to ordinarytourists.

Wat RongKhun in Chiang Rai, Thailand is unlike any Buddhisttemples in the world. The all-white, highly ornate structure gilded in mosaicmirrors that seem to shine magically, is done in a distinctly contemporarystyle. It is the brainchild of renowned Thai artist Chalermchai Kositpipat.

Actually,the temple is still under construction. Chalermchai expects it will takeanother 90 years to complete, making it the Buddhist temple equivalent of theSagrada Familia church in Barcelona,Spain!

Prambananis a Hindu temple in Central Java, Indonesia. The temple was built in 850 CE,and is composed of 8 main shrines and 250 surrounding smaller ones.

Nearly allthe walls of the temple are covered in exquisite bas relief carvings, whichnarrate stories of Vishnu’s incarnations, adventures of Hanuman the MonkeyKing, the Ramayana epic and other legends.

Though notthe biggest temple in Indonesia(Borobudur is larger), Prambanan makes up inbeauty and grace for what it lacks in size.

No oneknows exactly when the Shwedagon Paya (or Pagoda) in Myanmar was built - legendhas it that it is 2,500 years old though archaeologists estimate that it wasbuilt between the 6th and 10th century.

Now, whenpeople say "golden temple" they usually mean that the structure isgolden in color. But when it comes to the Shwedagon Pagoda, golden literallymeans covered in gold! In the 15th century, a queen of the Mon people donatedher weight in gold to the temple. This tradition continues until today, wherepilgrims often save for years to buy small packets of gold leafs to stick tothe temple walls.

As if allthat gold wasn’t enough, the spire of the stupa or dome is covered with over5,000 diamonds and 2,000 rubies (there’s even a 76 carat diamond at the verytip!). And oh, the temple housed one of the holiest relics in Buddhism: eightstrands of Buddha’s hair.

The Temple of Heaven[wiki] is a Taoist temple in Beijing, thecapital of China.The temple was constructed in 14th century by Emperor Yongle of the MingDynasty (who also built the Forbidden City) ashis personal temple, where he would pray for good harvest and to atone for thesins of his people.

The Temple’s architecture isquite interesting: everything in the temple, which represents Heaven, iscircular whereas the ground levels, which represent the Earth, are square.

Chion-in Temple was built in 1234 CE to honor the founder of Jodo (Pure Land)Buddhism, a priest named Honen, who fasted to death in the very spot. At onepoint in time, the complex had 21 buildings but due to earthquakes and fire,the oldest surviving building is from the 17th century.
Visitors tothe Chion-in Temple must first pass through thelargest gate in Japan:the two-story San-mon Gate. The temple bell is also a record setter: it weighs74 tons and needs 17 monks to ring it during the New Year celebrations.
Anotherinteresting feature of the Chion-in Templeis the "singing" floor of the Assembly Hall. Called a uguisu-bari ornightingale floor, the wooden planks were designed to creak at every footstepto alert the monks of intruders!

In the 19thcentury, Dutch occupiers of Indonesiafound a massive ancient ruin deep in the jungles of Java. What they discoveredwas the complex of Borobudur, a giganticstructure built with nearly 2 million cubic feet (55,000 m³) of stones. Thetemple has nearly 2,700 relief panels and 504 Buddha statues.
Untiltoday, no one knows for sure when and why it was built, nor the reason for itscomplete abandonment hundreds of years ago. Some scholars believe that Borobudur is actually a giant textbook of Buddhism, asits bas reliefs tell the story of the life of Buddha and the principles of histeachings. To "read," a pilgrim must make his way through nineplatforms and walk a distance of over 2 miles. 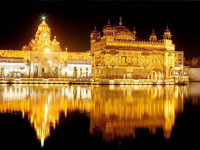 TheHarmandir Sahib (meaning The Abode of God) or simply the GoldenTemple [wiki] in Punjab, Indiais the most sacred shrine of Sikhism. For the Sikhs, the Golden Templesymbolizes infinite freedom and spiritual independence.

The site ofthe Templebegan with a small lake that was so peaceful that even Buddha came there tomeditate. Thousands of years later, Guru Nanak, the founder of Sikhism alsolived and meditate by the lake.
Constructionof the Golden Templebegan in the 1500s, when the fourth Guru of Sikhism enlarged the lake thatbecame Amritsaror Pool of the Nectar of Immortality, around which the temple and the citygrew. The Templeitself is decorated with marble sculptures, gilded in gold, and covered inprecious stones.

The Temple of Srirangam, in the Indian city of Tiruchirapalli(or Trichy), is the largest functioning Hindu temple in the world (Ankor Wat isthe largest of all temple, but it is currently non-functioning as a temple -see below).

The templeis dedicated to Vishnu, one of three Gods in Hinduism. Legend has it that along time ago, a sage rested and put down a statue of Vishnu reclining on agreat serpent. When he was ready to resume his journey, he discovered that thestatue couldn’t be moved, so a small temple was built over it. Over centuries,the temple "grew" as larger ones were built over the existingbuildings.
The templecomplex is massive: it encompasses an area of over 150 acres (63 hectares) with sevenconcentric walls, the outermost being about 2.5 miles (4 kilometers) long!The walls demarcate enclosures within enclosures, each more sacred than thenext, with the inner-most enclosure is forbidden to non-Hindus.
The Temple of Srirangam is famous for its gopurams orentrances beneath colorful pyramids. The temple has 21 gopurams total, with thelargest one having 15 stories and is nearly 200 feet (60 m) tall.

Last butdefinitely not least is the largest temple in history and the inspiration tocountless novels and action movies of Hollywood:Ankor Wat. Angkor Watwas built in the early 12th century in what is now Cambodia. Theworld famous temple was first a Hindu one, dedicated to Vishnu. In the 14th or15th century, as Buddhism swept across Asia,it became a Buddhist temple.
The Westernworld’s got a glimpse of Angkor Wat when a 16th century Portuguese monk visitedthe temple and eloquently described it as "of such extraordinaryconstruction that it is not possible to describe it with a pen, particularlysince it is like no other building in the world. It has towers and decorationand all the refinements which the human genius can conceive of." His wordsstill rang true today.
Touristsvisiting Angkor Wat usually also visit the nearby ruins of Angkor Thom andBayon [wiki], two fantastic temples that serve as the ancient capital of Khmerempire.