When we talk about a period of time that continues from the past until now, we use the present perfect (have been / have travelledetc.). Here, Dave and Jane are talking about the places Jane hasvisited in her life (which is a period that continues until now).

In the following examples too, the speakers are talking about a period that continues until now (recently / in the last few days / so far / since breakfast etc.):
•  Have you heard from Brian recently?
•  I've met a lot of people in the last few days.
•  Everything is going well. We haven't had any problems so far.
•  I'm hungry. I haven't eaten anything since breakfast. (= from breakfast until now)
•  It's good to see you again. We haven't seen each other for a long time.

We use the present perfect with today / this evening / this year etc. when these periods are not finished at the time of speaking (see also Unit 14B): 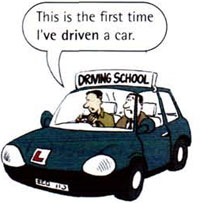 We say: It's the (first) time something has happened. For example:
•    Don is having a driving lesson. It's his first one.
It's the first time he has driven a car.  (not drives)
or       He has never driven a car before.
•    Sarah has lost her passport again. This is the second time this has happened.  (not happens)
•    Bill is phoning his girlfriend again. That's the third time he's phoned her this evening.

1 You are asking people questions about things they have done.

You are asking people questions about things they have done. Make questions with ever using the words in brackets.
Key.2 Have you ever been to California?
3 Have you ever run (in) a marathon?
4 Have you ever spoken to a " famous person?
5 What's the most beautiful place you've ever visited? 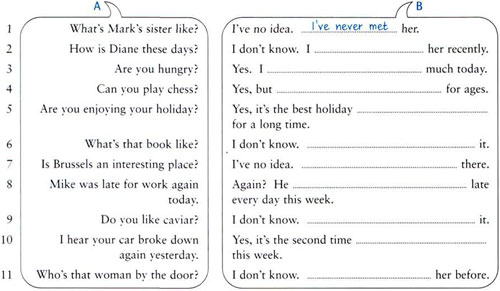 3 Complete the sentences using today / this year / this term etc.

4 Read the situations and write sentences as shown in the example.